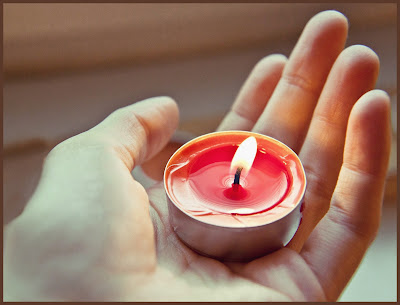 We who fully embrace God's truth may at times feel like someone standing with a candle in an artificially lighted room. We have found, in Scripture and Holy Mother Church, the authentic fire of God's love.  Holding in our hearts this genuine, precious Light of truth, often we find ourselves in the presence of something that appears to be light, but that is no more fire than a light bulb is fire.

We have all experienced "artificial light."  We live surrounded by it.  The world is drowning in it.  It is the "light" that says we're doing just fine without God.  It's the "light" that, if it credits God for even existing, shoves Him to the periphery and makes its own way without Him.  It reminds us, in one way after another, that humanity now considers itself "enlightened."  We have harnessed electricity, walked on the moon, decided when life is valuable enough (to us) to be born and when it's useless enough (to us) to end.  It's quite convenient and tidy, this artificial light.   It reveals the ingenuity of mankind, and it's more appealing than a messy candle that burns to a nub as it carries the flame.  It is Today's light, self-sufficient, broad-minded, politically correct - and certainly more sophisticated than the humble flame once carried by John, Peter, Paul, Benedict, Francis, Therese.

I suppose we would feel quite foolish if we were to stand around in electrically lighted rooms holding candles.  We would know people were talking about us behind their hands, probably snickering, perhaps feeling sorry for someone so silly as to stand with an old fashioned candle in a lighted room.

But what if there were a storm, a lightning strike, a downed power line?  What if the room suddenly fell into darkness?  It's at such times when people dash about in search of candles.

Storms come to everyone, at some time or other.  The artificial light reaches only so far.  Regardless of how bathed in self-sufficiency a person may be, eventually there is sickness, there are crises, there are times when darkness falls and the man-made lights we've relied upon all of our lives flicker out. It is often during times of storm when people go in search of Real Light.  It is then that they look for those who carry it.

As ones who live for God in the midst of the world, we are surrounded by light that is no light, or at best is temporary "this-world-light."  We might feel different from our neighbors if we're seen to be carrying the Real Thing.  We may be known as ones who don't hold the popular opinion, ones who live as if God actually exists, ones who go so far as to live as Jesus said to live.

If so, we can know we are not alone.  We can remember that God is with us, that the saints dealt with the very same thing, and that there are "carriers of the fire" all around the world, in this very age of the Church.

We can also know that God has us where He wants us, in our neighborhoods and workplaces and families.  All around, there are people who are (whether they realize it or not) looking for living, breathing examples of the Real Thing.

If storms come to their lives, such persons may be relieved to find us there, still standing firm, still caring, still giving example.

"Your light must shine before men so that they may see goodness in your acts and give praise to your heavenly Father."  (Matthew 5:16)

This is a slightly edited repost from our archives. It is linked to Reconciled To You and Theology Is A Verb for 'It's Worth Revisiting Wednesday.'