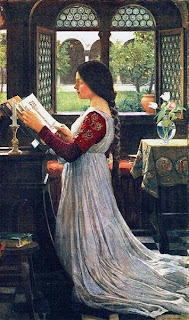 Did anyone else notice?  Yesterday I quoted Psalm 145, but typed it in as 146.  Didn't realize the error until after I'd prayed with Psalm 146 this morning.

Had a fruitful time of prayer, did some scribbling in my prayer journal, and then realized I'd put the wrong psalm number with the quote yesterday. It's not the first time I've made such a "mistake." I did it several times when I was first going through the Spiritual Exercises of St. Ignatius some years ago. The most interesting thing about my occasional "numerical confusion" is that God tends to work with me in the midst of it.

If my intention is to talk with God, He is always ready to engage in conversation. A good fruit of this is that I can share with you what happened as I prayed with Psalm 146 - with no concern that my own reflections will influence what may happen with you if you're praying with Psalm 145!

So:  here's a brief rundown from my personal journal-jottings.  I share these, this one time, to give another example of how this usually works for me.  I normally pray with the Scripture, then make quick notations of where I felt I was led in prayer.  This way I can stick with the prayer without distraction, while keeping track of how things are going.  I can go back later to my "jottings," and sometimes I see patterns emerging.

I began Psalm 146 by praying the first few lines, which were of praise.  Then I was struck by "put not your trust in princes, in man, in whom there is no salvation." (vs. 3).  Princes. Hmm.  I thought of government leaders, and I prayed for ones I could think of.  I prayed for our country's upcoming presidential election, and for God's will to prevail; I prayed for the primaries going on right now.  I prayed for leaders of countries throughout the world.  Then I felt God gently letting me know that I am to put my trust entirely in Him, always, for He will bring good out of earthly situations, whatever they may be.  I thought of Romans 8:28  "God makes ALL things work together for good for those who love Him, who are called according to His purpose." The next lines were confirming of this sense, and again led me into prayers of praise and thanksgiving. My prayer moved back and forth, alternating between thanksgiving and petition, praise and intercession.  I generally end with praise of God.

I asked for grace to go into my day with one ear pressed to the keyhole. Tomorrow or even later today, I will be praying with Psalm 145!


Suggested scripture for prayer and reflection:

"We are truly His handiwork, created in Christ Jesus to lead the life of good deeds which God prepared for us in advance."  (Ephesians 2:10) (umm...I THINK..)

Text not in quotes © 2012 Nancy Shuman.  All Rights Reserved.
thecloisteredheart.org


(Waterhouse painting on this post is public domain)
Posted by © Nancy Shuman at 1:02 PM