The Spirit of the Convent Bade us Pause 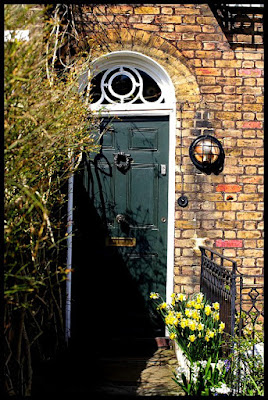 Having found the monastery where we'd be retreating for a few days, my friend and I were led into a small parlor. The room was separated from the street by the thickness of one wall, a narrow patch of greenery, a short wrought iron fence, and a brick sidewalk. I was surprised at the sudden silence. These walls must be thick, I decided, which only made sense given the age of the building. I'd been told that this was the oldest community of Visitation nuns in the United States (this monastery having been founded in 1799).

Some communities of the Visitation are able to offer laywomen a place of silent retreat for a few days inside the actual cloister, so the ladies can go back to their families spiritually refreshed and recharged. My friend and I were embracing this opportunity. Our time apart from the world would not be 'directed,' but would simply be a chance to pray and live alongside the nuns, in their own environment, and to experience a little sampling of monastic life.  We had found our way along an Interstate (taking a wrong turn in the process), we'd snaked through DC traffic, gulped down a few rushed meals, driven round and round this one area of Georgetown before finding our destination, and now, at the edge of the cloister - we found that our rushing came to a sudden halt.

‘The spirit of the convent bade us pause. All our worldly wisdom and ordinary knowledge seemed to take flight, and to be of no account whatever. We felt like children who have strayed into some privacy which does not belong to them, which they are hardly qualified to share.’ (A Story of Courage, p.12) 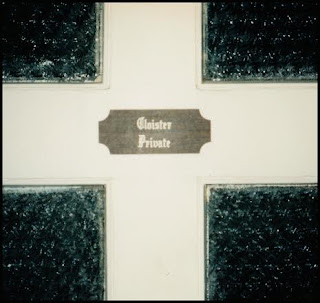 We were straying, indeed, into a privacy which did not belong to us, for we were laywoman and we'd be taking no vows. Yet I, for one, was not crossing the threshold unaware. The cloistered heart analogies I had been pondering were now, in physical form, standing right before me.  I had written that the 'enclosure' of a cloistered heart was within the will of God. We can make a choice to embrace His will, I'd said; we can make a decision to - by His grace - live within it. 'I like to use the analogy of a person entering the cloister because it is such a total move. The person entering physically cloistered life does not stick her head in today and leave her arms and legs dangling outside to be cloistered at a later date. She is either in or she is not. And yet we can give ourselves mostly to God and leave parts of our lives dangling outside that surrender.' (N Shuman)

I had a feeling I'd learn more about the analogies I'd been living with as I saw what life was actually like on the other side of the enclosure walls. 'We were to cross the threshold of the large entrance door, usually inaccessible to the world.....'

If I hoped to spend these next few days in reasonable comfort, I'd better bring every last bit of me inside.

Photo at top via Pixabay
Photo at bottom (cloister door), N Shuman - probably from Georgetown Visitation in the 1990s, but unfortunately I'm not certain of the location


This post is part of our series 'A Story of Courage.' To continue in chronological order, click this line.
Posted by © Nancy Shuman at 3:47 PM