A Brush With Simplicity 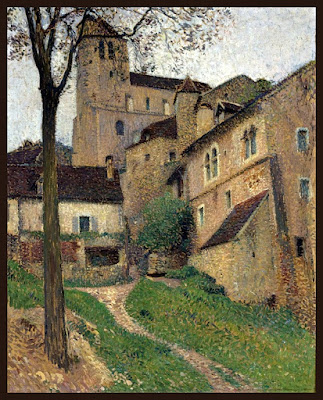 'The time of year at which we first saw the convent was perhaps not unfitting for our first impressions; since the December leaflessness, the unornamented aspect of the ground and the stone walls, whose vines were mere shadows, typified the stern simplicity of the life which the Sisters have adopted; while the bursts of delicate but cheery sunshine resembled their good spirits, which are so entirely spiritual.' (A Story of Courage, George Parsons Lathrop and Rose Hawthorne Lathrop, 1894, p. 1)

This selfsame convent, when I first saw it, was not unlike what the Lathrops had found a century before. Leafless, yes. Unornamented, yes. High walls splattered, on the day I arrived, with frigid autumn rain.

I sensed something of the 'stern simplicity,' and it took me by surprise. I was entering the cloister as a retreatant only; I would soon return home to husband and family. By this time I'd spent several years writing about, analogizing, daydreaming of life in a cloister, and I had long been anticipating my first tiny taste of the life inside. I would never have expected to arrive at the gates in a funny little grip of fear.

I had been well prepared by the retreat directress, who happened to be a personal friend. I would be housed in a cell, on a floor with the nuns. I was expected to wear modest skirts, quiet shoes, and to maintain silence. I'd be eating with the Sisters in refectory, and I could join them in the choir stalls for Masses and times of prayer. I had looked forward eagerly to doing these exact things, yet now that I was actually stepping toward my temporary enclosure, I was not so sure....

'Why should an amateur in the study of convents expect at once to comprehend their value, any more than a tyro in art the virtue of a Millet or a Michelangelo? Many people see no beauty in the highest art, who never confess their blindness. Is it not almost as mortifying to confess that we dislike holiness of life?' (Lathrop, p. 2)

I had been 'studying convents,' by this time, for at least two years - having been advised by Father Michael Scanlan T.O.R. to undertake such a study.  I had made, per Father's recommendation, a 'yes and no list' of where 'cloistered heart' analogies and goals fit or did not fit with charisms of particular Orders. It was absorbing work and I loved it. As a laywoman, I would always be something of  'an amateur in the study of convents.' Yet I found my heart soaring when I read descriptions of monastic life in all its stark beauty and its example of life lived totally, not just mostly, for God.

Now I was not merely reading about cloisters; I was walking into one. I'd imagined the silence of a monastery, and now I would have no choice but to briefly live inside the hush. Could I survive in 'stern simplicity,' even for a few days? It surely sounds dramatic to say I wondered. But: I wondered.

I've been blessed to be on retreat a number of times since that initial visit, but nothing has affected me like that first little sampling of life inside the walls. Now, thanks to the friend who presented me with this book (click here to read about it), I would like to share not only something of those first days, but fruits of several cloistered retreats. Which I will be doing for the next ... little while...?

I hope you'll be coming along.

Painting: Henri Martin, in US public domain due to age


This post is part of our series 'A Story of Courage.' To continue in chronological order, click this line.
Posted by © Nancy Shuman at 12:31 AM