A City Sort of Vision 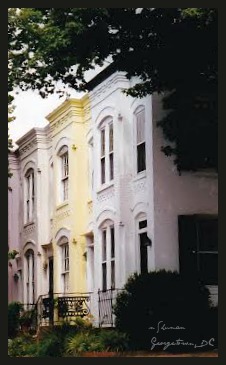 'The Convent is a large three-sided structure... Across the street is a row of cosy dwellings, standing somewhat back from the sidewalk... the city and the suburb have been gradually welded into one, by a continuous and expanding web of streets and houses...' (A Story of Courage)

As a retreatant in the cloister of this convent, I was once housed in a cell overlooking the sidewalk. The view, overlooking a street lined with rowhouses in Georgetown DC, was charming. But there was no respite from the noise.

One of the nuns later apologized for my not being placed on the other side of the building, where I would have overlooked the (quieter) cloister garden. No need for regrets, said I.  I was exactly where I needed to be.

On one of my mornings there, I wrote the following in my journal:   'Chant, as we prayed this morning, curled around me. I was nestled, as a baby in its mother's gentle arms. Lilting voices lifted like the softest of lullabies, and I was stilled.  Now I sit in my cell, looking out the window...

'The houses across the street 'look at this one,' and this one 'looks at them.' They share a narrow street, yet they are divided by a world, by an entire culture. How like a cloistered heart looking at the face of someone across a room, a street, a yard, out a car window, in a store, in the midst of a family gathering.

'I watch the sky turn light outside my window. The city is waking as I write this. Cars, buses, planes, all move along their way for one more day. Birds chatter, unmindful of the ways of man, of the city of man that is this bustling metropolis, this powerful and mighty place of power among the nations of earth.

'Perhaps I see contrast as much as anything as I sit here. Black branches stand in silhouette against a lightening sky. Cars rush by below me; silver, gray, maroon. Birds call out above me; brown, gray, maroon.

'Such an important city. Such human power in these houses and streets. And all the while, the sky stretches above all and is over all; unnoticed, for the most part.

'The cloistered heart is a 'city' sort of vision. We must learn to sing the songs of God in a land removed from Him. To sing the Magnificat even as we live the Pieta. Ours are gentle melodies in a land that has forgotten the song. Like birds calling from the treetops, like warblers who sing in the city of man, I must join the chorus.

'I must sing, and I must allow God to do what He wishes with the song.'

Most of the above is reposted from our archives. It is linked to Reconciled to You and Theology is a Verb for 'It's Worth Revisiting Wednesday.'


This post is part of our series 'A Story of Courage.' To continue in chronological order, click this line.
Posted by © Nancy Shuman at 12:33 PM