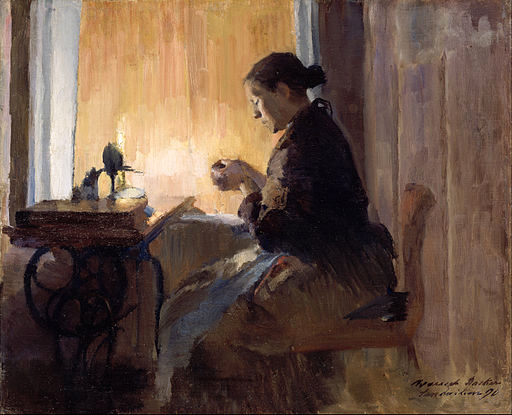 I have sometimes wondered what might have happened if, during my long-ago attempts at sewing, I had simply followed the directions. (I was notoriously lazy about doing so). Not only would I have worn skirts that didn't occasionally split at the seams, I might also now be the custodian of future family heirlooms. My home could be filled with quilts whose pieces I once took time to measure, and with various embroidered items that would not have fallen victim to my haste.

Does it seem I'm being too tough on myself? No. I realize it was 'just sewing.'  After all, it's not as if it had eternal implications.

Ah, but all of this is making me think again about 'habits.'  Habits of holiness, yes; and habits of prayer.

In recent years, I have been appreciating the discipline of faithful prayer times. Ordered ones, regular ones, times of at least 'saying hello.'  It would be rude to get up in the morning and not greet the persons in one's household, yet how often have I begun the day without so much as a nod in God's direction?  He is with me, He's going to stay with me throughout the day, and I can't be bothered to acknowledge His Presence??  Rude.

Perhaps my own lack of discipline is one reason I appreciate the routines of monastic life. I like the fact that one is reminded to pray, there, at regular intervals. To me, the segments of such prayer are like pieces of a pattern. Together, they form the habit of a monastic day.

I am far from developing such patterns within my own life. But I'm trying. I want to cooperate with God so that I may be clothed in a habit of prayer. In my cloistered heart, I am not doing away with the habit. Nor will I settle for a modified one. I want nothing less than the full habit of God's call to holiness, nothing less than the full habit of prayer.

I have envisioned intervals of prayer as pattern pieces. Morning prayer, for instance, has a certain outline; but within that, there can be variations.

What is the outline? Well, for one thing, it is prayer that's done first thing in the morning. It consists of a greeting, and generally an offering of the day to God. But it can be long or short, made up of a memorized prayer or spontaneous, it can be offered silently or aloud. Its basic outline is in some ways the same from person to person - yet the shape changes according to the needs of each one's family and daily life.

Prayer according to this outline is unique to every individual. Just as the same sleeve pattern can be cut from gray wool or pink silk or paisley-printed corduroy, each one of us will bring our individual praises, offerings or concerns into the outline of our own morning prayer. The important thing is that we bring it. And that we then add other times of prayer TO it, making up a complete day, forming in ourselves a habit of prayer. After all, a garment is no such thing if it's only made of a sleeve.

Am I asking too much of myself? Not at all. This time it's about more than sewing. It's about staying in ongoing communication with God.

Such a habit is absolutely necessary.  It has eternal implications. 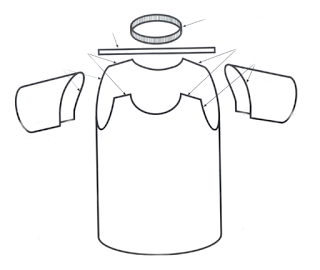 This is a slightly edited repost from our archives. It is linked to Reconciled to You and Theology is a Verb for 'It's Worth Revisiting Wednesday.'

Painting at top by Harriet Backer