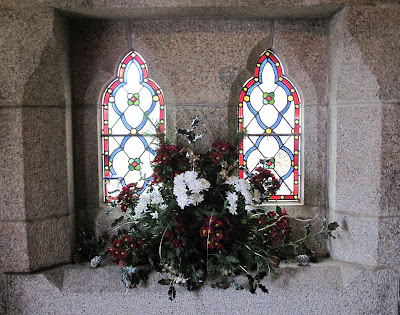 The Advent I wrote of in my last post was a season of non-stop reminders.  I almost couldn't get away from them.  Switching on a radio, I would catch an old familiar carol, one I'd heard every Christmas since childhood.  This time, however, the words sounded... different.

Rounding a corner, I picked up the tinny sound of Santa's bell as he stood beside a fat black kettle.   Sales clerks wished me merry Christmas.  A nativity scene was, as always, featured on the Court House steps.

Recalling that special season over these last few days, I've realized something.  That is:  the touches of God I had that Advent didn't happen in spite of the commercialism of this time of year.  They happened right in the midst of it.  They happened, in some instances, because of it.

The song that so moved me with its lyrics of "Jesus the Savior is born...."?  It was in an advertisement  for tires.  Pictures of Baby Jesus were glued to dime store displays, and on posters announcing concerts and events.  Songs were piped into stores to draw customers, and sometimes the same lyrics played over and over.  O come, let us adore Him.  Adore Him.  Adore Him.  (that Advent, I almost did).

I've heard discussions lately about whether or not Christmas should be celebrated before the 25th.  There is so much commercialism, the argument goes - and yes, I agree that this is the case.  In the Church, Advent is a time for quiet, for prayer, for gentle shades of purple.  In the physical monastery, hearts wait in hushed anticipation.

Most of us live, however, out in the red and green neon of the world.  We're where bells jingle, songs jangle, nerves frazzle, patience frays.  But during all of the glittery hype (I've realized), there is a moment of blessing.  In the secular, godless, "we're-doing-fine-by-ourselves" world, there appears in this season a window of opportunity.  A slot, a crack in the Everyday, through which the call of God might be heard through carol or card.

In recent years, we have seen that crack narrow.  The Court House steps of my childhood haven't seen a nativity display in years.  Store clerks wish me "happy holidays" at best.  But even now, somewhere between shoppers lined up for black Friday and the queues awaiting after-Christmas sales, there is still a window of opportunity.  A time when someone rushing through a store might catch the strains of an old familiar carol, one she's heard every Christmas since childhood.   Yet this time, the words sound.... different.  She remembers pictures of a babe in a manger, and suddenly her heart is stirred.

This is a season when we can acknowledge (like at no other time) the One Who was born for us. After all, few of our friends would toss out cards that happen to have nativity scenes on them.  Neighbors visiting our home won't be offended by the words of "Silent Night."  It's all just part of the season, part of the holidays, part of the fun.

The Church will begin Christmas music and celebrations on the 25th, but out here in the world, the Advent window is now open.

This is when scenes and songs normally found only in Church can spill out into the world.  And who knows?   Someone years from now might look back on a card I sent her this season, and recall that 2012 was her own special Advent.