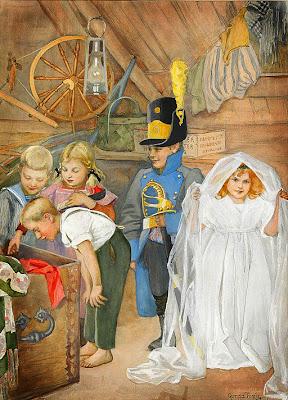 Dreams can be useful things.  They wander through the soul, leaving the merest whispers. I love them for the challenges they offer.

Daydreams stage little dramas in our minds.  They call us forward into roles for which we begin "trying out," as we consider which dreams to pursue and which to set aside.  As for me, I mentally rehearse for daydreams that make the cut as "keepers," and I start auditioning.

As a child, I rehearsed a lot for the part I most wanted to land as a grownup.  I had lots of props.  Dolls, of course, and pretend kitchen equipment, and dress-up clothes that made me look (I was sure of it) like a glamorous mommy.  I was especially fond of Mother's cast-off high heels, in which I teetered about house and yard at least a full inch taller.  I just knew my feet were growing into the shoes even as I wobbled along.

I look back on those days now not so much as pretending, but more as practice.   I landed my longed-for role as wife and mommy (guess I had a good audition).  I'd been prepared for domesticity by dolls that drank and wet, were diapered in my father's oversized handkerchiefs, and bathed in floating soap that was guaranteed 99 and 44-100s per cent pure.

As a child, I had role models.  I was surrounded by grownups - ones who had "made it."  Mothers who cared for their little ones and their homes, people who drove and worked and prayed and read.  I observed and imitated, knowing that one day I would "make it" to adulthood myself.  I hoped not only to be ready, but in fact I wanted to begin the grown up life right then and there.

I'm now long past childhood, but I'm not over the dreaming.  Indeed, I'm growing ever more serious about auditioning.  I am practicing daily for the most important role of my entire eternity.  God wants me to be with Him forever - that is why each one of us was created -  and of course such glorious existence is called sainthood.  So I look carefully at the role models Holy Mother Church has given me. I speak with and imitate (or try to, at least) many of those who have traveled this road before.  I tiptoe in their footsteps and teeter, stumble; trusting (if not seeing) that I'm growing step by wobbly step.

To be with God forever... it is a high dream, for it is HIS dream.  I pray to have a good audition.

"We must always have before our eyes the virtues and examples of the saints in order to pattern and form all our actions on them."  (St. Francis de Sales)

"A saint is a man before he is a saint.  Yes, the saints were human as we ourselves are.  They were faced with the same difficulties, and temptations and wrestlings and agonies that confront us, and they dealt with them just as we do, only more bravely, and with a greater constancy and a more steadfast hope.  When we realise this, we feel that, at however great a distance, we still may dare to equate ourselves with them.  Sanctity is a goal to which there is no short cut, a temple to which there is no back entrance.  To it, there is but One Way - His, Who said of Himself, 'I am the Way.'"  (from The Living Pyx of Jesus by a Religious, Pelligrini and Co., Australia, 1941)