Before the First Bell 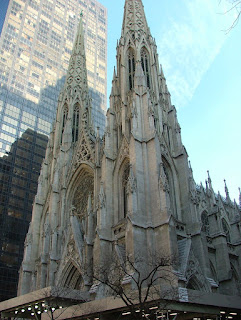 The first cloistered heart monastery I envisioned was nestled in a forest of green.  Nearly twenty years before, however, there had been a foreshadowing.  In itself this was a startling occurrence, for my level of interest in monasteries at the time was zero.  I was an active, single, compulsively busy young woman, and religious life was possibly the farthest thing from my mind.

I was taking a semester off college and working for an insurance company.  Our office was located on an upper floor of a building in the center of town.  One day, as I bustled about filing papers, I happened to look out through a large wall of windows.  My view went over the tops of shorter buildings across Main Street, to a large old church a block away.  The church, with its weathered gray stones and one large round window, made me think of a monastery. Without warning, I suddenly envisioned rows of black-habited figures walking through a kind of “enclosed garden” in the middle of that building.   There was no such garden in this church, and at that time I didn’t even know about cloister gardens.  Yet I had a sudden mental picture – like a daydream that was not actively imagined but was rather “dropped into my head” intact - of black-habited figures walking along silently.  My sense was that this was a place of prayer right in the middle of the bustling, busy, noisy city.  It was as if the garden inside high walls was not known to anyone scurrying by outside, and although those inside could hear noise all around, they were largely unaffected by it.

Never mind that buses rumbled, tires screeched, horns blared.  Inside the walls, hidden from the view of people rushing by, there was a secret place of prayer.  Even now I can picture the silent figures slowly moving, a soft autumn wind teasing the edges of their veils.

This mental picture was suddenly there and suddenly gone, leaving in its wake a thought most unexpected.  This was:  “I’ll probably belong to God someday.”  The belonging would be, I felt, as total as the belonging of a nun.  I remember going on with my work in the office as though this unusual vignette had not crossed my mind… but I never, ever forgot it.


I now look back and realize that the sense of people in an enclosed garden, right in the middle of a busy city, captures exactly the essence of “the cloistered heart.”  Mine is not the call to withdrawal into a silent hermitage.  Mine is a call to interact with the world and live in the midst of it.  To be in the world while not being of it.  To be a “place” where Christ can be adored, met with, and honored no matter where I happen to be.

The photo I share here, of St. Patrick’s Cathedral in New York, was taken by my friend Linda.  It's not unlike the scene, all those years ago, that triggered my foreshadowing.  And today it captures my sense of wanting my very life to be a "monastery".... right in the middle of the world.

Text not in quotes © 2011 Nancy Shuman.  All Rights Reserved.
thecloisteredheart.org
Posted by © Nancy Shuman at 12:25 AM