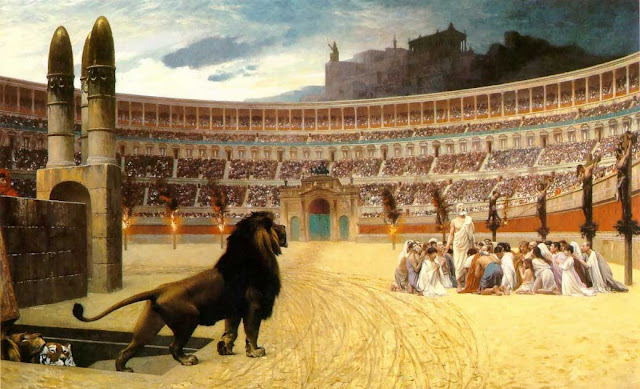 Hero: someone admired for great courage. Thus says my dictionary.
Heroic saints: those in Heaven who had the courage to get there. Which is everyone who IS there. Thus says me.
Yes, that second is my own definition and it's cumbersome, but I believe it's accurate.
After all, it takes courage to...
1. admit I am a sinner in need of a Savior
2. put my faith in Jesus Christ, especially when the world around considers Him insignificant
3. choose to believe Scripture
4. choose to believe 2,000 years of authentic Church teaching
5. choose to live according to Scripture and Church teaching
6. choose to live according to the teachings of Christ, no matter what
7. overcome obstacles to living for Christ
Every saint we've ever read about, every Christian martyr, has had this kind of courage. They became saints because they lived heroically. Some were martyred on scaffolds, or by stoning, or in lions' dens. Some endured imprisonments for their faith. Some led the most ordinary of lives, caring for those around them, unnoticed by the world.
Not one of the saints we read of was born with heroic, saint-making courage. The courage most often came gradually, step after baby step, followed sometimes by a defining leap or two. Along the path there were missteps, moments of caution, roadblocks. Each saint grew in courage, step by step by step.
"Francis' conversion did not happen overnight. God had waited for him for twenty-five years and now it was Francis' turn to wait. Francis started to spend more time in prayer. He went off to a cave and wept for his sins. Sometimes God's grace overwhelmed him with joy. But life couldn't just stop for God. There was business to run, customers to wait on. One day while riding through the countryside, Francis, the man who loved beauty, who was so picky about food, who hated deformity, came face to face with a leper. Repelled by the appearance and the smell of the leper, Francis nevertheless jumped down from his horse and kissed the hand of the leper......" (from Catholic Online)
St. Augustine "spent many years of his life in wicked living and false beliefs.... he heard about two men who had suddenly been converted on reading the life of St. Antony, and he felt terribly ashamed of himself. 'What are we doing?' he cried to his friend Alipius. 'Unlearned people are taking Heaven by force, while we, with all our knowledge, are so cowardly that we keep rolling in the mud of our sins!' Full of bitter sorrow, Augustine flung himself into the garden and cried out to God, 'how long more, O Lord? Why does not this hour put an end to my sins?' Just then he heard a child singing, 'take up and read!'  Thinking that God intended him to hear these words, he picked up the book of the Letters of St. Paul and read the first passage his gaze fell on. It was just what Augustine needed, for in it, St. Paul says to put away all impurity and to live in imitation of Jesus. That did it! From then on, Augustine began a new life...." (from Catholic Online)

In the tiny, hidden, day to day circumstances of our ordinary lives, imagine becoming "heroic!" It sounds presumptuous, doesn't it? But it isn't. It is not presumptuous at all.

Everyone in Heaven is a saint. So do we really want to be, eternally, anything less?

"Make up your mind to become a saint," said St. Mary Mazzarello.

I'm taking another step, today, toward heroism. I am making up my mind.

This is a repost from our archives. It is linked to Reconciled to You and Theology is a Verb for 'It's Worth Revisiting Wednesday.'
theCloisteredHeart.org
Posted by © Nancy Shuman at 10:39 PM