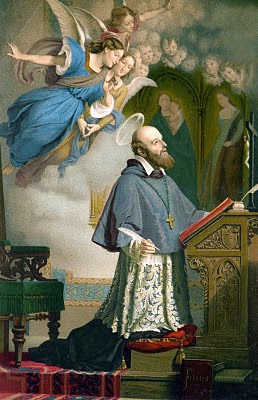 I like to imagine that, were he living in our age, St. Francis de Sales would be a blogger.  After reading the following on Catholic Online, I suspect my idea may not be all that far-fetched....

"Francis' unusual patience kept him working.  No one would listen to him, no one would even open their door.  So Francis found a way to get under the door.  He wrote out his sermons, copied them by hand, and slipped them under the doors.  This is the first record we have of religious tracts being used to communicate with people."

With this in mind, I would like to invite everyone here on yet another field trip.   Catholic Spirituality Blogs Network has twenty blog posts in the running for the first-ever Frankie Award, which will be awarded in honor of - guess who......!

I have a post among the nominees, that being "Go Through the Motions," from my other blog The Breadbox Letters.  We can click here to go visit the various posts, allow God to touch our hearts through them, and vote for one if we wish to do so.

It is primarily because of his tracts, copied tirelessly by hand and slipped under doors, that Francis de Sales has been named patron of Catholic journalists.  I cannot imagine a more appropriate saint for bloggers.

May he pray for all who slip faithful, God-honoring, blog posts through today's cyber-doors.
Posted by © Nancy Shuman at 4:09 PM